Jimmie Kanaya epitomizes the phrase “selfless service.” While his parents were locked away in a Japanese internment camp, Jimmie served his country as a medic in Europe, eventually being captured by the Nazis. After months of captivity in harsh conditions, Jimmie was liberated. After a time, he found himself serving in occupied Japan before going to Korea. Despite these difficult experiences, Jimmie made the Army a career, serving over 30 years and retiring as a Colonel. To me, Colonel (ret) Kanaya is a hero.

He and his wife invited me over to their house for a conversation earlier this year. After a warm greeting, Jimmie invited me into his office where awards, decorations, and memorabilia hang on the wall, testaments to a lifetime of service. We spent quite a bit of time talking about his experiences with his mementos as a guide. He showed me how to work his German mess kit, the very one he carried every day as a prisoner of war. “If you didn’t have one, you couldn’t eat,” he told me in a matter of fact tone. Although incredibly proud of his service, Jimmie is very humble. He always gives credit for his success to those around him. I realized very quickly how much Jimmie loves the military and how proud he is to have been a part of its history.

Jimmie served in the 442nd Infantry Regiment, a unit comprised of mostly Japanese American service members. Their story is amazing. Frequently ordered to undertake very dangerous missions, the 442nd was the most decorated unit for its size and length of service in the United States Army. They received numerous citations. Twenty-one members were awarded the Congressional Medal of Honor. Many members enlisted from inside internment camps, choosing to serve the country that had locked them up. I’ve been fortunate enough to meet a few surviving members of the 442nd or their families during my time in the Pacific Northwest and feel humbled every time.

For our conversation, we sat at Jimmie’s kitchen table, leaning over in front of our microphones. The first part of our conversation spanned the better part of an hour. We covered numerous topics, including Jimmie’s service in France, his capture, Korea, and a trip to visit his parents in a camp while he was serving. Eventually, Lynn sat down with us and we talked for a while longer.

I consider myself incredibly lucky to have met Jimmie and Lynn. I’ll be forever grateful for the experience. 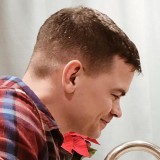 An amateur collector of stories and podcast host.

Enter your name and email address to stay up to date on the latest podcast episodes and news.